Fifty years ago, P&P Industries was founded in Morrison, Illinois. We could not be more excited to celebrate our history, our success and all of the incredible accomplishments achieved thanks to our employees, customers, partners and the local community.

Reflecting on Generations of Success

Fifty years is a big deal to us. While no one could have predicted the current landscape of the industry and the events of the past year, we are thrilled to celebrate this milestone anniversary and our history as a family-owned company.

“This milestone is even more special when you reflect on the generational aspect of our history,” said Brian Pruis, President of P&P Industries. “You can’t have 50 years without three generations. We are proud to say that we have successfully transitioned from our first generation to the second. We are even more proud to say that we are entering the third generation at P&P Industries. We know the company will continue to succeed under the eventual leadership of the incoming third generation.”

Like any family-owned company, P&P Industries understands that with each generation, the chance that the business may not carry on increases. Statistics show that multi-generational family-owned businesses do not often flourish. In fact, the survival rate of a family-owned business successfully making the transition from the first generation to the second is only 30%, according to Score.com.

At P&P, we are proud to celebrate 50 years of manufacturing excellence, especially given that some companies do not make it one, five or even 10 years, let alone 50. This milestone provides us with plenty to celebrate!

Important Milestones – The Transformations That Have Shaped Our History

In 50 years, we have had several transformations in our history, which have helped build the company into what it is today. Our humble beginning started in 1970, when our founder Warren Pruis, a tool and die tradesman, decided that he wanted to build tools and fixtures for local OEMs on the side of his full-time job. After reaching out to a fellow member of the fire department, Warren was able to secure a small space in the back of a construction business. Pruis and his brother then went out and purchased $3,000 worth of lathes and mills, marking the creation of P&P Tool. The brothers’ shop grew, and in 1972, they purchased their first injection molding machine. Not long after that, Warren made a leap of faith, jumping into work full time at P&P – a big transition for him, but one willing to take. Following this transition, the brothers quickly outgrew their original space, which they rented for $50 a month, and moved to a new location. As growth continued, they moved once again to increase space in 1984. Moving to the old Clystic School building added space for increased capabilities for the shop, prompting a name change from P&P Tool to P&P Industries. Soon after the move, P&P officially became a molding supplier for John Deere. Through this partnership, we have been challenged as a company to have continuous operational improvement.

1995 marked another transition for the company, as Warren officially bought out his brother and took over sole ownership of the company with his wife, Marcia. To ensure the success of the company, Warren and Marcia needed to work long, grueling hours. However, their hard work helped build on the early success of the company. This transition period also marked the beginning of the second generation starting at P&P, and during these years, the second generation embraced scientific molding, which improved our quality and efficiencies tremendously. Then in 2005, P&P’s hard work and effort paid off in the form of John Deere’s Supplier of the Year Award – an admired symbol of our success.

In 2012, we had officially outgrown our old school building, bringing us to another fork in the road. With the option to add on to the existing facility, move to a larger facility, or build our own, P&P Industries ultimately decided that building our own facility was the best bet – this ensured that we would attain the infrastructure needed with a building designed specifically for injection molding. Any company move is a big transition, but building one from the ground up adds a new layer of challenges. In the end, we successfully transitioned to our new state-of-the-art facility in Sterling, Illinois, which embodies our continued commitment to reaching the status of a world-class injection molder.

Constructing a brand new facility was a risk, but we trusted our long-term growth projections and built a facility that we could grow into for years to come. Since moving in, P&P has filled that space quite well, adding new presses while still leaving room for continued growth.

In 2016, we reached another important milestone in continued success with John Deere, achieving their 15-year Supplier Hall of Fame award. This award was a tremendous honor for us as it highlighted the hard work we sustained, maintaining status as a high-level and trusted supplier. Our entire team understands the importance of cost, quality and delivery, and since 2016, we have upheld the same high level of expectations.

The latest transformations in our history and one designed to work in conjunction with our 50-year celebration was our company’s rebrand, highlighted by a new logo and website. The new logo displays a bold, modern look for P&P with interlocking P’s that signify the close relationship between all stakeholders at P&P. Overall, P&P decided it was time to refresh our logo to represent the current culture of the company and the ever-growing mindset of the company.

To the outside world, our logo reflects the close partnership between family, company, customers and employees, all working together to provide value in the form of plastic parts. However, internally, the logo has a slightly different meaning.

“In the context of 50 years, this logo represents the next generation of the company,” said Pruis. “In the early years, my Dad [Warren] had a couple of different versions of the logo. In 1995, they wanted to do a rebrand, which was also the same time the second generation was coming on. That rebranded logo was the one that we just retired, and it served us well for 25 years.”

Rain Check: The Effect of the COVID-19 Pandemic

When thinking of how to celebrate the legacy of P&P Industries, we developed several plans at the end of 2019, which included some fun events such as welcoming our local community to come and learn more about the history of P&P.

Other plans included making t-shirts and holding internal activities throughout the year for our employees to acknowledge that 50 years is a big deal for us. We also worked with our prototype house, PDP, to make a tool. This tool produced a commemorative P&P coaster set featuring each one of our history’s four logos. Unfortunately, when February 2020 hit, we were forced to postpone our plans and shift our efforts toward managing the COVID-19 pandemic.

While our celebrations have paused, for the time being, P&P continues our dedication to doing everything we can to build on our cornerstones of continuous improvement and scientific injection molding. We continue to strive to create repeatable successes in the route to becoming a world-class injection molder. Reaching this status is more of a journey than a destination, but P&P would not be where we are today and would not have had the success we have experienced without the incredible and dedicated team that continues to help us grow.

Ready to discuss how we can help you? Contact P&P Industries today! 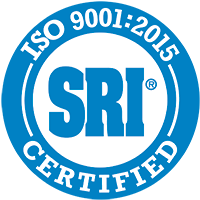